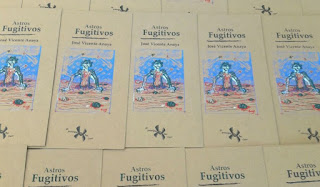 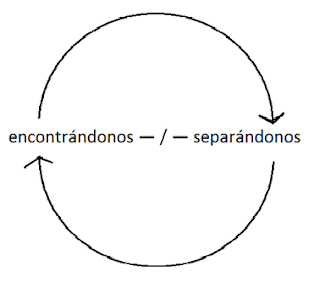 People talk by of the key´s eye.

Although in the words of José Vicente Anaya himself, the infrarealist movement only lived three years, and that the forced dissolution had its cause in various situations of travel, change of residence and other dispersed motives of its members, their poetic has survived. That group, which brought together twenty writers not considered in an official literature, and with three written manifestos, will produce an important piece of work for Mexican literature.

I will start by considering that the language we use has part of its origin in Latin and that using the infra prefix supposes that we are below what we relate to ... Therefore, having a vision below reality evokes a position in the that simply looks up, you touch the bottom, the ground, the subsoil. From this position there is nothing left but elevation, sublimating towards height, the journey to reality from the other perspective. But, there is the dilemma of seeing the floor, the background that limits us and then there may be something else, seeing from what is already there.

José Vicente Anaya with his infrarealist proposal places us under a persistent reality, beyond the assumption of understanding reality as a given system. An objective reality, seen from a closed perspective, that could not allow the poet the expression of the world. That thing which is the everyday environment, life in its appreciation and the common agreement of the meaning of the words, is revealed through the poet's gaze. This one that gives a signifier that does not have the word in its origin.

In the plaquette “Astros Fugitivos”, recently printed by the publisher El Principio del Caos, we have the opportunity to approach the recent work of José Vicente cautiously, and some verses by “Hikuri” remind us that:

Cynical laughter!
If we speak all the existing languages, soon the babel will lead us to total confusion. Therefore, lacking meaning, words would lead us to the construction of a new language; Hollow and deep search to give meaning to speech. The intention of the synthesis of ideas and the hard work of naming things once again, contribute with new voices to the construction of their own vocabulary, which will be linked with these new speakers, to a common agreement of meaning. This is where the poet appears and changes the lexicological perspective, the vision below reality. Another meaning for the words that underlie the conscious value of everyday life.

True to his slogans, he dictates "Therefore, infrarealism is the contingency that deals with the meanings and changes that rationalism can never foresee, even with the help of tons of precision equipment." Pointing out the precepts of their contingency and circumstance.

Already in Hikuri, the voice of José Vicente moves us to another dimension of the real, it is not speculated that it is under the influence of the sacred old man of the desert, of his ingestion and digestion of the mescaline, which allows to open the doors to other realities. But to the situation that remains in the eyes of the poet, who looks at us as underlying, from the depth, from the very substratum of each voice and from the values ​​that we accord over centuries of their common uses. The sound as such is reproduced and catalyses the new values ​​that the reader gives to this reality that reappears.
the image of this one that looks is broken

If we spoke through the keyhole, the diluted voice would be the seseante manifestation, not through the invisible eye of the key. The one that fills the gap by inserting oneself in that minimum space necessary to open doors to other realities, each one as a construction of the reader's openness to that higher world. Beauty, in the objective, is only a canonical system. Established by the majority subordinated to the norms that a small group promotes and disseminates. This also gives us the guidelines to question ourselves about the values ​​that are pre-established by the limited gaze of the critics, as well as by the merchants of beauty. This would be to see through the lock that at the end of things only prevents the passage to the opening, which the key achieves and sees through itself. To speak through the eye of the key is to lead to the fullness of the sound that opens.

And ... What to speak or say, that if such or such a poet is really, that if the text per se, is poetry? In Vicente Anaya, we will have to consider the image that can persuade the reader of its own meaning, in several of his verses, so to call them, we will find punctuation that allows a value of added meaning, the use of capitals in the whole line, the separation of each letter creating spaces in the discontinuity of the word and even geometric figures that suggest values.

The revaluation of signs, graphics and words, the result of this new babel, which demystifies confusion in favor of construction. We will be dispersed once more by the bare word that without meaning requires another reality. The mental state that exhales in itself covered with other realities:

Break with the canon, break with the already broken, and re-crack this reality. Self-definition, re-signification of oneself, covered with poetry as a new tunic. Also, it leaves to the speculation of the reader, the responsibility of the new construction of the voices. Let each one review his poem, re-signify what he re-believes, and in his understanding agree with him and with others the meaning that his vision generates. But the poem is dismembered and vanishes. However, beyond the words, we follow the link to the Spanish language, in Vicente Anaya, there is an arrogant detachment when using the name Hikuri, as well as a diversity of raramuri words in his poetics, he does not give explanations and he assumes that the confusion The reader must be resolved on the basis of their linguistic heritage, hence the value of the secrecy of the native voices: neje rawéwari Hikuri go'íshima / piri mu oráa eyema atza. "Híkuri is not a rarámuri poem, but the poem of an urban author who, after living with the Tarahumara culture, returns to the city and is forced to make a complete reinterpretation of reality."

Quote in his infrarrealist manifesto "Individuals who reduce life to their own simplicity and pragmatism do not see beyond the artificial walls that they themselves have erected, this is one of the ways in which the creative imagination is murdered, without considering that imagination is another prerogative of the humanity of the person. " It condemns blindness, murders the created, pragmatic propeller of the uncreated. Thus, the poem is the key itself, it is also the eye of the key, which can unearth the new value of the voices. Leaving to the readers, the experimental creation of a new world:

Each word will express a different content to each reader. The old sayings say: every fool with his subject. Thus the diversity of interpretations of the word, of the poem in itself, before the disjunctive imagination of each one. José Vicente Anaya, reinvention, inviting to see through the eye of the key.